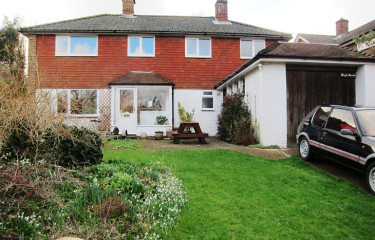 This event has now finished.

Di and Mike have a simple philosophy of avoiding waste, which has led them to try and make their house as efficient as possible, within reasonable economic constraints.
They were both brought up to avoid waste and have steadily improved their house, with cavity wall insulation, new double glazing and good levels of loft insulation. They also took the advantage of re-insulating a flat roof from above, when the felting had to be renewed.
Lighting has also been tackled, using CFLs initially, but more recently LEDs. Mike is also involved in the Power Rangers initiative, which involves lending monitoring equipment to householders, to enable them to appreciate the electrical energy used by items of equipment and track down waste.
By adopting common sense measures, they have cut their total CO2 emissions by over 75% versus the norm for UK housing.
The last obvious target is the non condensing boiler, which is still wasting lots of gas, but its days are numbered.

Buses: 2A service runs once an hour from Rottingdean to Steyning, via Brighton and Shoreham. Full details here bh.buscms.com/brightonbuses/uploadedfiles/tt2-150913.pdf
Nearest train: Shoreham-by-sea.
Bike: via Route 2 and the Downslink www.westsussex.gov.uk/downslink

This event has now finished.